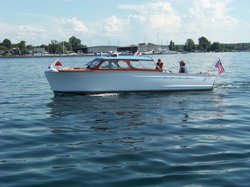 Boat
The Muskie was originally ordered by the Heineman Family of Picton Island in 1953. Although fitted out as a fishing boat, she was used primarily for carrying guests and family to and from the mainland and around the Islands. Years later she was sold to Clayton resident Mickey Augustine who enjoyed her as his personal watercraft for many years before passing away. He left her to his daughter Barb Phinney and was only used by the family a couple of years before putting her into long term storage at the family’s residence.
In the summer of 2009, Jeff Garnsey retired from the U. S. Navy and returned to his home town in Clayton. He discovered the boat which was an exact duplicate of both his grandfather’s and father’s old Chris Craft. After the purchase from the Phinney family she received her name Muskie which was the same as the last two generations of Garnsey fishing guides. The Muskie was completed restored over the course of the next 2 years to her original beauty. She now spends most days between May and November on the River fishing, touring or enjoying the scenic beauty of the Islands. 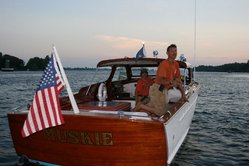 Boat Captain History
Captain Jeff Garnsey is a third generation fishing guide from a family that spans 9 generations in the 1000 Islands. From the time of his 10th birthday he was a deck hand for numerous Clayton fishing guides including Clark Jackson, Roly Garnsey (his grandfather) and Joe Garnsey (his father).

He retired after 26 years in the Submarine force as a Master Chief Petty Officer. He returned to Clayton and in the winter of 2009 received his Master’s Captain’s License and once again joined the ranks of the Clayton fishing guides. In the spring of 2010 he kicked off his first season with Garnsey’s Classic Island Cruises. In addition to fishing, he offers personalized tours as well as wine and cheese cruises in both day and evening hours.
Website by North Shore Solutions